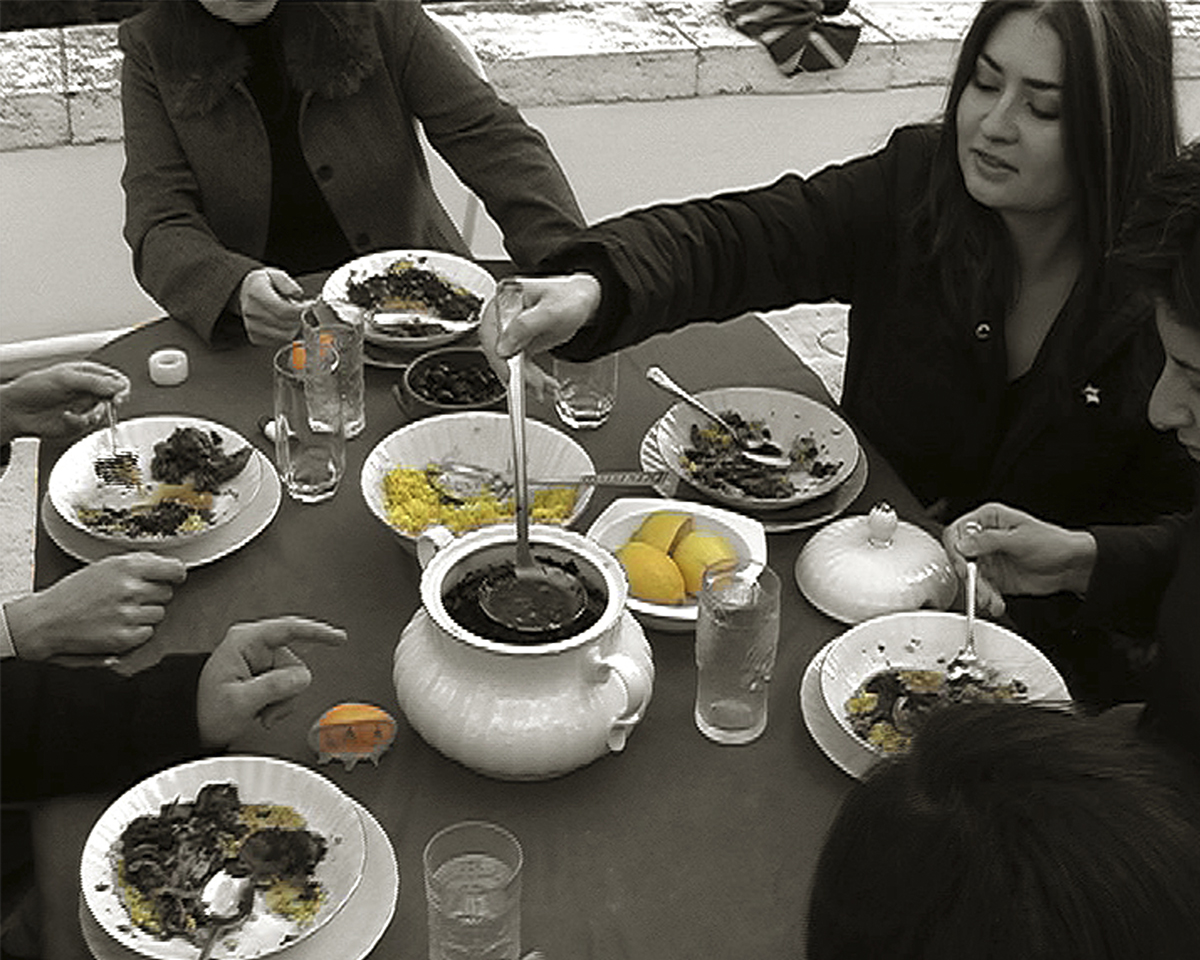 Soup Over Bethlehem (Film, 9′) depicts an ordinary Palestinian family, Sansour’s own, around a dinner table on a rooftop overlooking the West Bank city of Bethlehem. What starts as a culinary discussion about the national dish ‘mloukhieh’ soon evolves into a personal and engaging conversation about politics – thereby emphasising the symbiosis of food and politics so indicative of the Palestinian experience. (Description courtesy of the artist).

This screening of Soup Over Bethlehem will be accompanied by a response to the film by Serene Husni, addressing various concerns ranging from language and food histories to the complexities of ‘national dishes’.

GUEST SPEAKER BIO:
Serene Husni is a video editor, mentor, writer and translator. A Diasporic Palestinian, and immigrant from Jordan turned Canadian-settler, she is a displaced human existing between multiple cultures, languages, and locales. She creates most of her own work in her mother tongue, Arabic. Freely available to watch online, her latest film “Brown Bread & Apricots” (2020) talks about the role of the pantry in homemaking for her father’s exiled Palestinian family. The film won the Qayrub Award for “Best Canadian Short Film” from the Toronto Arab Film Festival in 2022. Serene was a guest writer on the first season of the podcast Mahdoum -digestible in Arabic- by SOWT, which talks about the histories of popular “Arab” dishes. She is a co-writer and co-editor on the much-anticipated feature documentary by Polina Teif, A Eulogy for The Dead Sea (2022).

Soup Over Bethlehem is presented as part of Place Settings II, which continues Summer 2022 with performative projects staged throughout the city of Toronto. Each project engages in a discursive gesture that considers new possibilities at the intersections of food practices and public space, revealing the shareable and relational qualities of both.

Place Settings, curated by Noa Bronstein, is a large-scale, durational project that considers how food functions to connect and disrupt. Focusing specifically on the intersections of food, public space, and architecture, Place Settings points to formal and informal structures that offer forms of nourishment, be they physical, emotional, social, or political.

We are working towards accessibility measures for our events. For more information, please email Emily Cook, Education/Accessibility Programs Director, at emily[at]criticaldistance.ca.