Produced for this billboard space is an image of Tanya Lukin Linklater’s poem, Suk. Originally appearing in the artist’s book of writings entitled Slow Scrape, Suk is re-contextualized here in order to propose an alternative pace to the movement of bodies that pass by on the street, acting as an introduction to the exhibition that continues inside the gallery space. Though separated from its original context as part of a series of writings, traces remain to this life in the faint words visible on the reverse pages. This visual quality offers a reference to Lukin Linklater’s meditations on memory, language, and erasure which continue in both the book, and her practice as a whole. Lukin Linklater continues to explore the themes of relation and embodiment in her video installation , Hands, presented in the gallery.

Slow Scrape was published by The Centre for Expanded Poetics & Anteism in 2020, and edited by Nathan Brown and Michael Nardone. The poem Suk is a part of a set of texts that include event scores.

This billboard installation is part of the exhibition You sit in a garden, curated by Chris Andrews and featuring works by artists Laurie Kang, Lila de Magalhaes, Nona Inescu, Jenine Marsh, and Tanya Lukin Linklater.

Chris Andrews (b. 1994) is a curator and artist living and working in Tiohtià:ke (Montréal).

Tanya Lukin Linklater’s performances, works for camera, installations, and writings centre histories of Indigenous peoples’ lives, lands, and structures of sustenance. Her performances in relation to objects in exhibition, scores, and ancestral belongings generate what she has come to call felt structures. 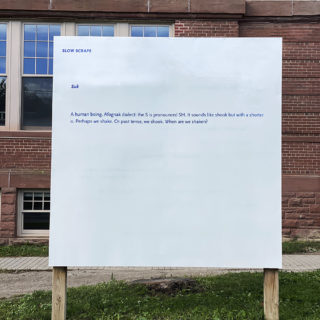 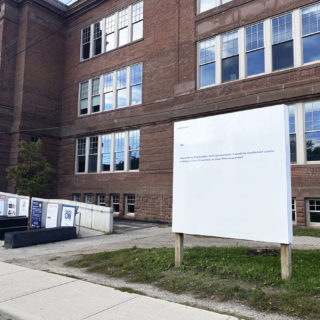 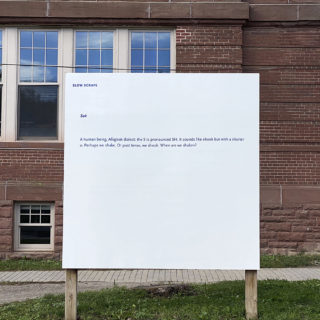