This billboard is presented as part of the group exhibition Groundwork, curated by Valérie Frappier for Critical Distance. Featuring artists Alana Bartol, Ileana Hernandez Camacho, and Tsēmā Igharas, the exhibition grapples with the mindset of extractivism and highlights how site-specific performance can bring focus to alternative ways of relating with land. Groundwork is a Featured Exhibition of the 2021 Scotiabank CONTACT Photography Festival.

Groundwork foregrounds camouflage as a performance strategy to investigate the divide between human and non-human. Displayed here is documentation of a 2019 performance by Tsēmā titled real camo. The action took place on the obsidian quarry where her Tahltan ancestors harvested the volcanic rock in her territory’s mountains, located in the north-west of so-called British Columbia. In pointing to her nation’s ancestral mining practices which have existed since time immemorial, she considers how this ethical harvesting can influence an “alternative extractive reality” for the future, in resistance to the Western corporate resource extraction that dominates contemporary land use in Canada. Here, Tsēmā crouches among the stones wearing a jumpsuit printed with an image of the quarry. She camouflages herself with the obsidian, asserting her connection to this land.

Critical Distance thanks the Scotiabank CONTACT Photography Festival for support in making this billboard possible.

Valérie Frappier is a white settler Franco-Ontarian curator and writer from Aurora, Ont., currently based in the Toronto region. Frappier’s research and curatorial projects consider questions of gender, race and place within Canadian cultural production and discourses surrounding the climate crisis.

Tsēmā Igharas is an interdisciplinary artist and member of the Tahltan Nation. She uses Potlatch methodology to create conceptual artwork and teachings influenced by her mentorship in Northwest Coast Formline Design at K’saan (2005/06), her studies in visual culture, and her time in the mountains. 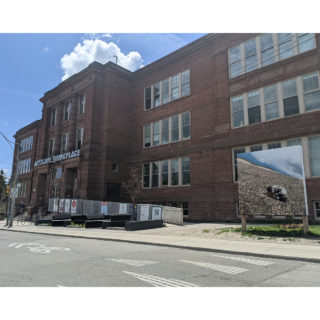 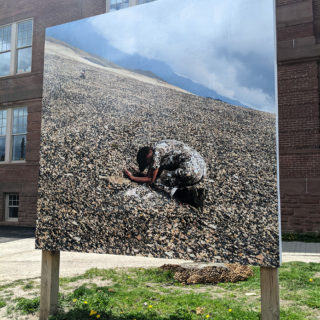