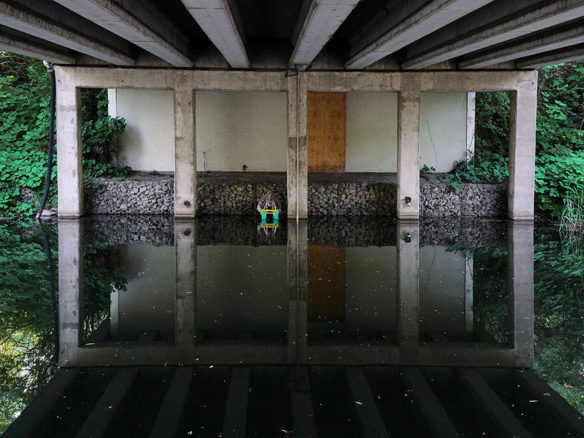 ***This event will take place on Zoom in English with ASL translation. Related texts are available in Spanish, French and English. The performance will also include a Live Audio Description and Captioning. Please contact emily@criticaldistance.ca with any access concerns.***

As part of the group exhibition Groundwork, Tiohtià:ke/Mooniyang/Montréal-based artist Ileana Hernandez Camacho will debut a new dimension of her CORPS ROCA project in a live performance on June 22, 2021.

CORPS ROCA is an evolving and ongoing work, initiated by the artist in 2018 as part of a residency at Verticale, centre d’artistes in Laval. The work centres Hernandez Camacho’s performances where she embodies and gives voice to a rock. Using humour to critically question humanity’s relationship with the environment, the rock re-narrates the evolution of the planet, citing itself—rather than humans—as the most evolved species on Earth. Hernandez Camacho’s act of camouflage as a rock seeks to incite a change in perspective in viewing the non-human as inanimate and unimportant. Rather, in embodying the rock as a walking and talking being, she questions dominant ways of thinking about the non-human as lifeless matter only existing as a backdrop for humanity, and imagines what would shift if humans treated the non-human as its equal.

Hernandez Camacho builds CORPS ROCA through interactive performances in public space. In the written story of the work, there are two main characters so far: the rock and l’espèce molle (meaning “the soft species,” also known as the human species).

In this live performance which will be screened via Zoom, Hernandez Camacho will explore and show us characteristics of the soft species, from the perspective of the rock. The actions, sounds and images of this presentation are based on her own investigations from past performances, and the observations and responses that she has experienced when interpreting the rock.

The event will take place on l’Île Notre-Dame at 6PM and will be followed by a Q&A with the artist over Zoom, moderated by the curator of Groundwork, Valérie Frappier.

Introduction to the CORPS ROCA story:

“Our population was corrupted by a civilization whose principles and values were based in plastic dreams and metal structures. We were crushed, made to be decorations, divisions, tools… some, prisoners. We weren’t part of the same society. We are waiting for their era’s end so we can create our world. We are not in a hurry, we will never be.”